"The stone that the builders rejected has become the chief cornerstone.
This was YAHWEH's [LORD] doing; it is marvellous in our eyes.
This is the day YAHWEH has made; we will rejoice and be glad in it" Psalm 118:22-24.

We have sung the song for decades 'this is the day that the LORD has made; we will rejoice and be glad in it'. We have probably all thought we were rejoicing in this 24-hour day that we are enjoying; so we acknowledged God and rejoiced before Him until someone said, 'which day are you singing about?' 'What do you mean?' Answer: check out Psalm 118:22-24 and see that the day that we are singing about is the day in which "The stone that the builders rejected has become the chief cornerstone". This is the day! The day in which the Cornerstone has been set in place. We can say it is referring to Messiah's day, the day of Christ.
This amazing reference in Psalm 118 is quoted in the New Testament in the gospels of Matthew 21:42, Mark 12:10 and Luke 20:17; it is quoted in Acts 4:10-12 and it is quoted by Peter in 1 Peter 2:7.
Now is the time to discover the importance of the cornerstone being set in place by YAHWEH, and to come to know that the cornerstone is actually a person; to come to know that without the cornerstone the house of God, the church, cannot be built in the earth.

Behold I lay in Zion

When there is no cornerstone there is desolation forever

"They shall not take from you a stone for a corner nor a stone for a foundation, but you shall be desolate forever. Says YAHWEH" Jeremiah 51:26.
This verse is addressed to Babylon. God cannot build on a rebellious people! The house cannot be built without a reliable foundation and cornerstone. There was no such stone to be found in the Babylonian empire and because of that, Babylon fell, and the 'Babylon' referred to in the book of Revelation has also fallen (Rev.18:2). There needs to be a stone and that stone will be for a foundation and for a cornerstone.

Who are the builders?

The religious leaders of Israel were meant to be the builders of the house of God, but they rejected Jesus and were thereby rejecting the only and necessary cornerstone.
The religious leaders who opposed Jesus were similar to the Babylonians in that they were rebellious and refused to accept and receive Christ in their midst. It is recorded three times in the Gospels that Jesus rebuked them by quoting from Psalm 118:22-23. In Matthew, Jesus gave this quote after having told 'the parable of the two sons' and 'the parable of the wicked vinedressers. The Scripture says, "When the chief priests and Pharisees heard His parables, they perceived that He was speaking to them" but they rejected Him and "sought to lay hands on Him" (Matt.21:28-46).
The quote in Mark is in a similar context (Mark 12:1-12).
The quote in Luke 20:9-19 is in a similar context, but Jesus then applies the quote in a very powerful way. He said, "Whoever falls on that stone will be broken, but on whomever it falls, it will grind him to powder" (v.18).
Jesus obviously knew the significance of the cornerstone being set in place so that God's purposes could be established and fulfilled in the earth. It is interesting that there was such strong opposition to Jesus from religious leaders, and He used the quote from Psalm 118 to warn the opposition that this stone would "grind him [them] to powder".
The reality of the cornerstone being set in place is very significant, having been prophesied in Psalm 118, expanded in Isaiah 28:16 to also be the foundation stone, and the warning in Jeremiah 51:26 that no cornerstone or foundation stone could be found anywhere else. Jesus alone is that stone.

The Cornerstone appears in the flesh

In Acts 3 the lame man, who used to sit "begging alms at the Beautiful Gate" (Acts 3:10) had been miraculously healed, and many people gathered round. Peter preached Jesus to them (Acts 3:12-26). Then Peter was arrested (Acts 4:3) and brought before "their rulers, elders and scribes" as well as members of the high priestly family (Acts 4:5-6). Peter "Filled with the Holy Spirit said to them ... let it be known to you all, and to all the people of Israel that by the name of Jesus Christ of Nazareth, whom you crucified, whom God raised from the dead, by Him this man stands here before you whole" (Acts 4:8-10). Peter is proclaiming the gospel of Jesus Christ of Nazareth and stating clearly that this lame man had been healed "by the name of Jesus Christ of Nazareth".
Then Peter quotes from Psalm 118, telling us who the cornerstone is. Peter said, "This is the stone which was rejected by you builders, which has become the chief cornerstone". Who is the stone? Answer: Jesus Christ of Nazareth. Who were the builders? Answer: the "rulers, elders and scribes" and the high priestly family (Acts 4:5-6).
Wow! This is wonderful! The cornerstone is none other than a person, Jesus Christ of Nazareth.
Peter continued preaching concerning Jesus Christ of Nazareth who has "become the chief cornerstone" (Acts 4:11). Peter said, "Nor is there salvation in any other, for there is no other name under heaven given among men by which we must be saved" (v.12).

The foundation is laid

When Jesus asked the disciples "But who do you say that I am?' Simon Peter answered and said, 'You are the Christ, the Son of the living God'" (Matt.16:15-16). Jesus then noted that Simon Peter's answer was a revelation from heaven (v.17).
Then in verse 18 Jesus said, "I say also to you that you are Peter, and on this rock, I will build My church, and the gates of Hades shall not prevail against it". Jesus actually gave Peter that name "which is translated as a stone" (Jn.1:42) - in the Greek 'petros'. The word for 'rock' is a similar but different word in the Greek, 'petra', meaning a rock, not just a stone, but something more significant.

Christ is the Rock

Who or what is the "rock" on which Jesus was going to build His church? Jesus is the rock on which the church is to be built. It is the revelation, of who Jesus is, that allows and enables the church to be built. It is through the preaching of CHRIST that the mystery of Christ is made known. [Please read Ephesians 3:2-8 to see Paul's emphasis on 'the mystery of Christ'].
Peter as a stone is not the rock of foundation, but surely as an apostle with the revelation of who Jesus is, he is able to lay the only foundation, the rock of revelation.

The cornerstone is set

Once the foundation is in place, then the cornerstone is set and in Him "the whole building, being fitted together, grows into a holy temple in the Lord" (Eph.2:20-21). There is a world-wide temple [church, house] being built, in every nation, in all the world. And in Him "you also are being built together for a dwelling place of God in the spirit" (v.22). In every locality there is to be a church in which people can find God and be built into that spiritual house.

Who can be the cornerstone?

In Zechariah chapter 4 we have the vision of the lampstand and the olive trees and the house builder Zerubbabel. The Scripture says "Who are you, O great mountain? Before Zerubbabel you shall become a plain and he shall bring forth the capstone with shouts of grace, grace to it!" (v.7). Jesus Christ is also the capstone. The building is only complete when the capstone is in place, and the church is only complete when all the members have grown "up in all things into Him who is the Head - Christ - from whom the whole body (is) joined and knit together " (Eph.4:15-16).

Peter says that we are to come to Christ as "to a living stone, rejected indeed by men, but chosen by God and precious" (1 Pet.2:4). Jesus Christ is that stone - the cornerstone that was rejected by men but chosen by God. Peter is talking about a spiritual house being built, with a holy priesthood, able "to offer up spiritual sacrifices acceptable to God through Jesus Christ" (1 Pet.2:5).
Then Peter quotes from Psalm 118 and once again this powerful prophetic Scripture is given New Testament prominence. Peter, who preached Jesus the Cornerstone in Acts 4:10-12, is now again telling us that the stone which the builders rejected has become the chief cornerstone (1 Pet. 2:7). Peter also quotes from Isaiah 28:16, that God will "lay in Zion a chief cornerstone, elect, precious" (v.6). But if we ignore Him; if we do not receive Him, then He becomes "a stone of stumbling and a rock of offence" (v.8).

Do not reject the Cornerstone

But we are not of those who reject Christ the Cornerstone, for us He is "precious" (1 Pet.2:4). We are not of those who reject Jesus Christ the only foundation, but rather we seek to build on that foundation only, not mixing doctrines and theologies with the pure word of God. We are not among those who fail to give Jesus Christ "preeminence in all things" (Col.1:18).
Christ is the key to everything. The preaching of Christ is so important, and it is the lack of preaching Christ that has led to disunity and divisions in the body of Christ. It is time to look again for the stone who has become the chief cornerstone. "Listen to Me, you who follow after righteousness, you who seek YAHWEH: Look to the rock from which you were hewn" (Isa.51:1).

This is the day that YAHWEH has made!

has become the chief cornerstone.

This is YAHWEH's doing; it is marvellous in our eyes" 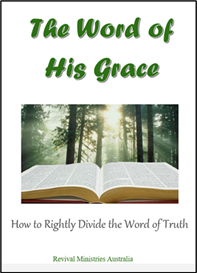